Entertaining Angels While Playing Chicken on a Sled 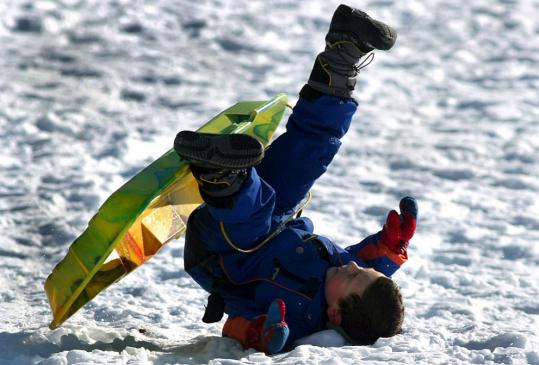 So I don’t have any way to prove this, and you can’t disprove it, but it really doesn’t matter. I’m going to take the liberty to allow the idea in my head that I almost ran over an angel with my sled tonight.

Tonight a gaggle of us went sledding down a hill by my friend Tricia’s house. There were a bunch of teens and a few good adult friends, too. Colton came along too and had a blast. We were there for probably 2 hours or so. About 10 – 15 minutes before we left, another couple and a kid showed up and were doing some sledding. I amost ran into the woman while Isaac and I were playing chicken by aiming our sleds diagonally from opposite sides of the hill.

Anyways, we finish up, head back to Tricia’s, and as we’re getting out of the cars, one of my teenage friends Zorina exlaims, “I can’t find my keys!” Yes, she’d had them in her pocket while sledding. Yes, they had somehow, strangely, most obviously very abnormally, fell out amongst all the bumps of sledding. You could see it in her face. “What am I doing to do!? My mom is going to KILL me!” As most of kids get their snow clothes off and head inside for pizza and hot chocolate, I’m still getting rid of wet stuff out there in the garage with Zorina and another boy, Aaryn. “So here’s the worst that could happen,” I start out. That didn’t help. Not a bit. So I tell her I’ll take her back and look for 20 minutes, but that’s all I can do tonight. But we’ll do it. Aaryn decides to come along as well.

On the way I tell Zorina that since I’m driving her back, she gets to pray. And so she does. Short, a bit desparate, a bit funny, but isn’t that how we often get when we feel silly asking for Jesus to fix something that’s totally our own stupid fault? Along the way I get to tell Z that, yeah, I agree with her that she did something stupid, but that doesn’t make HER stupid… but even so… yeah, don’t sled with keys in your pocket, especially your only SET of keys. Then again, looks who’s talking. I’ve locked ALL FOUR sets of keys in my car at the same time. I know this pain.

It’s about that time that Zorina says, “hey, what’s that?” A stick is stuck in the snow with a pink glove on top, kind of like a flag. Also dangling from that stick are her keys. We looked for literally about 30 seconds, and within 2 minutes, we’re back in the car zooming back to Tricia’s house. You could feel the cloud nine relief all over the place. Z thanks baby Jesus on the way back, and then I start venturing into my little “visit by angels” idea.

What if… what if that family that showed up were angels sent from God? They showed up just before we left, so that we knew they were there. They were gone by the time we got back, which wasn’t much more than 20 minutes. So they didn’t stay long. It’s like they showed up so we’d be sure to see them, and once we left, they “miraculously” found her keys, stuck them on the stick with the “flag” of a pink glove, and then left. Like their mission was accomplished. Like they’d been sent for that purpose alone, and by the time we got back, they weren’t even there to thank. And so God gets the thanks instead. No names, no car descriptions, no need to try to figure it out… we’ll just stick to the Entertaining Angels story.

So we get back and Z tells the story. Aaryn backs it up. It’s cool to listen to other people tell stories you first shared with them. I get home later and tell it to Erin, and she asks me a couple times, “is that really how it happened?” No tricks? No pranks? Nope. Just plain and simple good people (or were they NOT just people?) happening to find her keys within a few minutes, put them where we’d find them, and then leave… that or they were sent for that purpose. I’ll believe the latter, because I can. And because the Bible says it happens.

Keep on loving one another as brothers and sisters. Do not forget to show hospitality to strangers, for by so doing some people have shown hospitality to angels without knowing it.Hebrews 13:1-3

I AM, however, glad I didn’t run over the lady on my sled. How messed up would that have been?